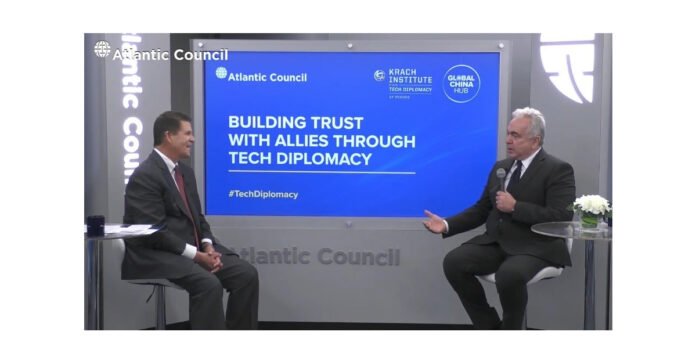 WASHINGTON–(BUSINESS WIRE)–The Atlantic Council hosted a bipartisan briefing on leveraging Tech Diplomacy to build trusted alliances. The exclusive briefing was delivered by former Under Secretary of State Keith Krach and the Biden Administration’s Coordinator for Indo-Pacific Affairs at the U.S. National Security Council, Kurt Campbell. Atlantic Council President Fred Kempe described the event as a rare briefing featuring two people at the forefront of government and private sector efforts to bring together U.S. allies and partners to meet the greatest challenges of our time.

“Krach is a leader in uniting like-minded stakeholders through a series of trust principles under the ‘Trust Doctrine’ to drive change, for which he has been nominated for the 2022 Nobel Peace Prize. I can’t think of a more important time to be doing this kind of work. The Atlantic Council is delighted about the Institute’s official launch,” said Fred Kempe. “The Krach Institute is the first institution of its kind focused on Tech Statecraft, a new model of transformational diplomacy that integrates high-tech strategies with foreign policy tools and national security to ensure trusted technology is used to advance freedom.”

Campbell, a leading U.S. diplomat for the past 30 years, said State Department leaders look forward to building on their relationship with the Krach Institute for Tech Diplomacy at Purdue, which opened April 5th, 2022, under the leadership of Krach as Advisory Board Chairman. Campbell offered White House support for the Institute and its mission of ensuring that leaders of the United States and like-minded nations harness critical emerging technologies to advance freedom.

“For those in our audience who don’t understand the challenges of coming into government, particularly as there’s been a transition in parties, Keith is one of the few people that reached out to me when I was appointed to offer counsel and advice,” said Campbell. “The person who sat down with me and explained what the challenges would be like once coming into the National Security Council was Keith Krach.”

“I am grateful for this opportunity to talk about the Institute for Tech Diplomacy at Purdue you founded and are going to help lead. I’m just thrilled that you’re taking this on,” said Campbell. “One of the rarest things in government is continuity of programs because when a new government comes in, they think I’ve got a better idea and I am going to do it differently. Almost all the work that Keith did at the State Department, including trusted networks, the Blue Dot initiative, etc., have been followed on in [the Biden] Administration and, in many respects, that’s the highest tribute.”

This bipartisan approach to countering economic and technological authoritarianism stems from Krach’s U.S. Senate confirmation hearing, where Senator Chris Coons, a Democrat from Delaware, asked Krach about his strategy for defending freedom. Krach responded: “My focus will be on harnessing our three most powerful areas of competitive advantage by strengthening our partnerships with friends and allies, leveraging the innovation and resources of the private sector, and amplifying the moral high ground of our democratic trust principles to advance peace and prosperity.”

The “Trust Principle” doctrine was then deployed by Krach and his team after his unanimous confirmation as the Under Secretary of State. As the recent Forbes article, 2022 Nobel Peace Prize Nominee Keith Krach’s “Trust Principle” Is Antidote To Authoritarianism, explained: “Krach’s ‘Trust Principle’ is based on democratic values. These include respect for the rule of law, property, press, human rights, national sovereignty, labor and the environment, and standards for transparency, integrity, and reciprocity. The ‘Trust Principle’ is the new basis for 21st century international relations. It stands as a peaceful alternative and antidote to Russia’s and China’s ‘Power Principle,’ a geopolitical framework rooted in brute power, coercion, and intimidation.”

Krach added that trust is a unifying tenet of peaceful collaboration. “It’s a powerful competitive advantage” for democratic alliances and serves as a “security blanket” against authoritarian bullying. “Trust is something democracies have, and autocracies lack.”

“The goal was to deliver a repeatable, duplicatable and enduring model for all areas of techno economic competition,” Krach added, “It consisted of harnessing our biggest areas of competitive advantage by rallying our allies, leveraging the innovation of the private sector, and amplifying democratic values based on trust.”

Campbell remarked that the Krach Institute for Tech Diplomacy plays a critical role in helping the U.S. and our allies defeat techno-authoritarianism. “Part of why you’re on a mission is to help people understand that…the current arena is technology. It’s 5G. It’s quantum computing. It’s artificial intelligence. It’s robotics. It’s human sciences. And frankly, it’s those cutting-edge areas where the United States must maintain its position on the commanding heights,” said Campbell. “Our best way forward is not only to work with partners and allies and friends, which frankly you’ve done more than almost anyone in helping that, but also recognizing what steps we need to take domestically [referring to the pending U.S. Innovation and Competitiveness Act, or USICA].”

Krach and Bonnie Glick, director of the Krach Institute for Tech Diplomacy, recently addressed USICA and the national imperative of securing the semiconductor supply chain at a bipartisan roundtable hosted by the U.S. Secretary of Commerce Gina Raimondo. Krach compared the legislation to the Apollo program, stating that “it serves as a powerful catalyst for additional private-sector investment and sends a clear message to our citizens, allies, and the Chinese government itself that America is united in its commitment to preserve our precious freedom from authoritarianism.”

Kurt Campbell ended the briefing by praising Krach for rising above political divisions and providing valuable advice to the Biden Administration. “The fact that you have offered so often, Keith, to help me and to help others…and the fact that you are continuing in your mission to help people understand the important qualities of an effective competition in technology, the domestic kinds of investments that we need to make, the kind of environment we want to create for our partners and friends. It’s extraordinarily important,” said Campbell, who offered assistance in advancing the Krach Institute’s mission, “if there’s anything that we in our office at the White House can do to support the Institute in your mission at Purdue and the work that you’re going to do in Washington, DC.”

“We appreciate all your support in this vital mission and look forward to working with you as we roll out the Commission for Global Technology Security with our allies and the private sector,” concluded Krach.

“This is a mission that we all must be engaged, and we all have to rise to the task,” said Campbell. “And if we are not successful in some of the work that Keith has laid out that we’ve tried to follow through on, we are going to lose,” concluded Campbell. “Competition is not just a continuing process, you got to be able to measure yourself in their areas, and we just need to do better.”

Following are key quotes from Krach during today’s panel with Campbell:

On Taiwan: 22:47 “Taiwan has always been such a great friend and they’re a real role model democracy, not just in the region but around the world. They…dispel Xi’s myth that the Chinese culture needs an authoritarian government and not democratic.”

On Maintaining America’s Competitive Edge: 24:24 “The reality we face as a nation and actually the free world is one of ever-increasing seemingly ceaseless variations of intense, weaponized competition. Our rivals are playing the long game they’re playing for keeps. They’re playing a four-dimensional game of military, economic, diplomatic and cultural chess. And at the intersection is technology, which is really the key battleground.”

On Confronting Authoritarianism: 29:52 “You know, it’s important to maintain the moral high ground and … being able to leverage that and leverage democratic values, things like integrity, accountability, transparency, reciprocity, respect for the rule of law – all those things that we honor in the free world. But authoritarian regimes like China and Russia do not.”

On Global Economic Security: 37:30 “We developed this global economic security strategy that had three pillars. The first pillar was to turbocharge economic competitiveness and innovation. The second is to safeguard America’s assets. The third was to build a network of trusted partners.”

On the Krach Institute for Tech Diplomacy: 44:25 “This whole area of integrating high-tech strategies with foreign policy tools…based on the Trust Principle – this is something that they don’t teach in State, DOD, Treasury or Trade. And so this is what the Krach Institute for Tech Diplomacy is all about: is to take those skills and not just train the world’s diplomats in terms of our allies, but also the private sector.”

About the Krach Institute for Tech Diplomacy at Purdue:

The nonpartisan Krach Institute for Tech Diplomacy at Purdue is the world’s preeminent institution focused on Tech Statecraft, a new model of diplomacy that bridges the high-tech sector with the foreign policy and national security sectors to ensure trusted technology is used to advance freedom.​ The Krach Institute for Tech Diplomacy is a 501(c)(3) that leverages Purdue’s strength in innovation, deep expertise in technology, and global prowess in educating transformational leaders. It focuses on rallying our allies, leveraging the innovation of the private sector, and amplifying democratic values based on trust.