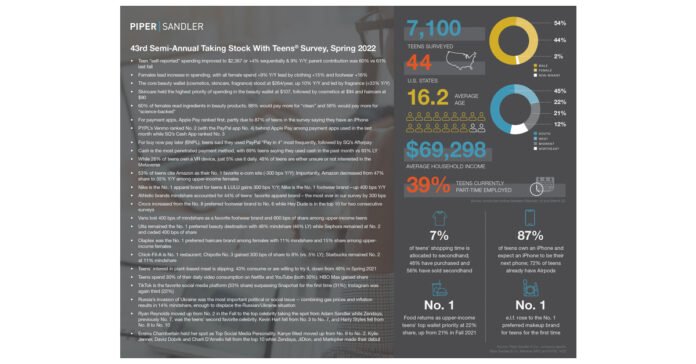 For the survey infographic and more information, visit pipersandler.com/teens

“Our Spring survey showed an acceleration in overall teen spending, up 9% Y/Y. Of note, females continue to lead the growth in not only fashion spending (clothing +15%, Footwear +16%), but also continue to lead in the shift to digital with 95% of upper-income females shopping online vs 91% of males. Additionally, the core beauty wallet (cosmetics, skincare, fragrance) stood at $264/year, up 10% Y/Y led by Fragrance (+33% Y/Y). Female teens everyday use of makeup also continues to trend upward. Within apparel, athletic is still the dominant trend with Nike and lululemon taking new highs. Importantly, 44% of upper-income teens preferred apparel brands that are ‘athletic,’ a new survey high since Spring 2017 at 41%. Within footwear, while Nike reigns supreme, Converse took the No. 2 Spot from the Vans, Crocs increased ranking, and Hey Dude made the top 10 at No. 9. Coach took back its No. 1 ranking as a preferred handbag brand since the mid-2010s while Michael Kors came in at No. 2, above Louis Vuitton. Importantly, we continue to see a silhouette change with looser fitting or flared denim, however we are seeing this trend spreading to leggings as we received responses such as ‘flared leggings.’ Too, food regained the top wallet share for upper-income teens after losing the top spot last Fall.

“GenZ is known to be a conscious generation, and teens this Spring cited the Russian invasion of Ukraine as their top concern, pushing the Environment to No. 2. Gas prices showed up as the No. 4 concern, and when combined with inflation, would have ranked No. 1.

“Teens continue to spend roughly four hours a day on social media as TikTok surpassed Snapchat as their favorite social media platform for the first time. While Amazon still remains the No. 1 website—it did see mindshare slip Y/Y driven by female teens’ mindshare dropping 1,200 bps Y/Y. Interestingly, 26% of teens own a Virtual Reality device, however just 17% use it on a weekly basis,” said Nicole Miller Regan, senior research analyst.

The Piper Sandler Taking Stock With Teens® survey is a semi-annual research project that gathers input from 7,100 teens with an average age of 16.2 years. Discretionary spending patterns, fashion trends, technology, and brand and media preferences are assessed through surveying a geographically diverse subset of high schools across the U.S. Since the project began in 2001, Piper Sandler has surveyed more than 218,900 teens and collected over 54 million data points on teen spending.