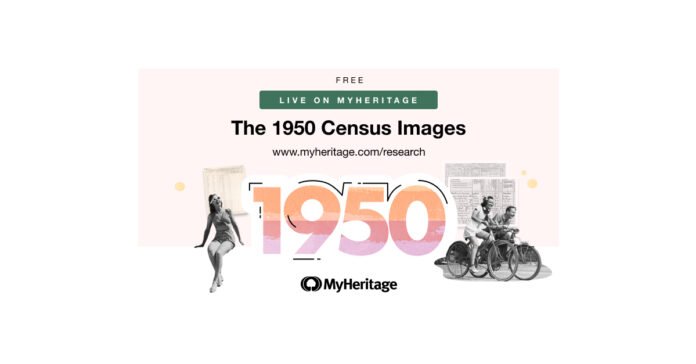 TEL AVIV, Israel & LEHI, Utah–(BUSINESS WIRE)–MyHeritage, the leading global service for discovering your past and empowering your future, announced today the complete publication of an image-only collection of the full 1950 U.S. Census records, which can now be browsed free of charge. MyHeritage is the first company to achieve this with all metadata to make the images searchable (by state, county, city/town, and enumeration district), since the records were released earlier today by NARA (National Archives and Records Administration), 72 years after the enumeration was initiated.

At 12:00 am on April 1st, 2022, the U.S. Census Bureau and National Archives released the images of the 1950 U.S. Census, precisely 72 years after enumerators began knocking on the doors of over 46 million American households, revealing important details about their place of residence, household occupants, occupations, age, birthplaces, and Immigration status.

“This is a momentous occasion for family history,” says Gilad Japhet, founder and CEO at MyHeritage. “The fact that this significant collection containing millions of images was made available on our site only 13 hours after receiving them, is a testament to the brilliance of the MyHeritage engineering team, providing value to consumers thirsty to search the 1950 census.”

The records form the first national census following the Second World War, the start of the Baby Boomers, and an increase in emigration from war-ravaged Europe to the U.S., making its publication of interest to many families outside the country. The decade that passed between 1940 and 1950 was one of the most eventful in human history. (See interesting information about the U.S. 1950 Census below.)

To help people get started with census research, MyHeritage released the Census Helper™ – a new feature that tells you who in your family tree is likely to appear in the 1950 U.S. Census and in other censuses.

Following the release of the records, here are key highlights MyHeritage’s Research team has gathered so far:

MyHeritage is the leading global discovery platform for exploring family history. With billions of historical records and family tree profiles, and with sophisticated matching technologies that work across all its assets, MyHeritage allows users to discover their past and empower their future. MyHeritage DNA is one of the world’s largest consumer DNA databases. MyHeritage is the most popular DNA test and family history service in Europe. Since 2020, MyHeritage is home to the world’s most advanced AI technologies for animating, repairing, enhancing, and colorizing historical photos. www.myheritage.com