This year’s Fitbit Charge 4 was supposed to solve many of the troubles that afflicted the Charge 3: It brought back onboard GPS, streamlined the design and even threw in NFC payments for good measure.

While our reviewer Valentina Palladino largely liked the improvements, she also saw room for improvement in the minimal music controls, fitness syncing and smart features. The $150 device earned a solid score of 82.

Naturally, we wanted to hear what our readers thought as well. Here’s what they said when we asked them to weigh in on their experiences with using the Charge 4 day-to-day.

Our reviewer Valentina called the design of the Charge 4 dated, since it strongly echoed its predecessor in look and feel. User reviewers may not have felt the same exact way, but they did have other things to say: Edgar said it was definitely not the most beautiful watch but it worked well for his wife.

K had a few compliments, saying the Charge 4 “felt like a quality product” and had a good form factor. For pros, K listed the quick-charging and waterproofing abilities. They also liked that “the design is simple and the device is lightweight.” Mark said the SPO2 sensor was nice, but “not accurate enough to rely on as a medical device.” Dan was pleased that it was easy to read in daylight. 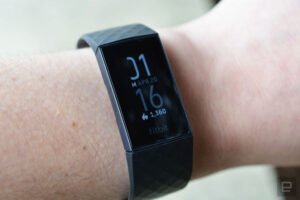 Fitbit claims the Charge 4’s battery can go seven days with regular use, and five hours with GPS enabled. This was reinforced by both Valentina’s and our users’ experiences. Valentina still had 20 percent battery after three days (which included a few hour-long GPS sessions), while Dan said he was “just a couple of hours short of seven days since my last charge and I still have 28 percent of the battery remaining.”

However, he also found that “the built in GPS takes like 20 percent of the battery on an hour long walk … This was disappointing. Then Fitbit released an update that lets me use the GPS on my phone instead of the built-in GPS. Problem solved.”